A STEP IN THE RIGHT DIRECTION

Plant Palestine Campaign in Pakistan: All Parties of Pakistan announces fully support to Palestinian’s cause 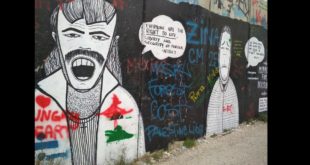 Palestine in photos: On the Segregation Wall, messages of solidarity

Palestine in photos: In Hebron, a microcosm of the Israeli occupation

By:Chirag Dhara Introduction: Palestine rarely makes the news in Indian media. When it does, it …